Praise for The Ice Storm

In Meg Kearney’s masterful crown of sonnets, The Ice Storm, the drama of a disintegrating marriage plays out against the backdrop of storms and disasters, natural and man-made. The opening line of the first sonnet, “The marriage is over before the storm strikes” also serves as the opening line of the fifteenth, since this is (in all senses) a heroic crown. But throughout the interim, we accompany this unhappy couple, intimately experiencing with them “the silent storm that tears a marriage to rags / and leaves [them] wondering what hit them.” In retrospect, this marriage clearly seems to have been doomed from the beginning, but the painful journey of discovery the reader shares with these two people is nonetheless tonic and exhilarating because of the sequence’s happy marriage of artistry and insight.

—Bruce Bennett, author of Just Another Day in Just Our Town

Meg Kearney writes The Ice Storm with passion and a skill so subtle that sometimes you're not aware you're in the midst of a crown of sonnets—but solely in the tempest of a breakup. This magnificent sequence infuses the end-of-love sonnet tradition with poignancy, anger, and damage. The marriage “starts like a lullaby, innocent as rain,” but when the union implodes, “outside the window is ice.” All the practicalities that rarely make it into poetry, from money to sump-pump batteries, appear in Kearney's verse page-turner. Her sonnets writhe and fracture with emotion that “sweeps in ruin,” making a monument to the swift talent of this splendid poet.

In The Ice Storm, Meg Kearney tells the story of a marriage disintegrating against the backdrop of the traumatic events of 9/11 and their aftermath. Whether read as a single long poem or a crown of sonnets ending with a marvelous final cento, The Ice Storm reveals this wonderful poet’s tonal and formal accomplishment, as well as her refusal to look away when the world is “imploding again,” or from the painfully raw truth of “how love can die so quietly.” 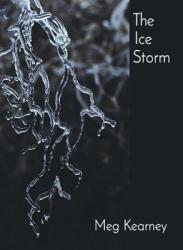