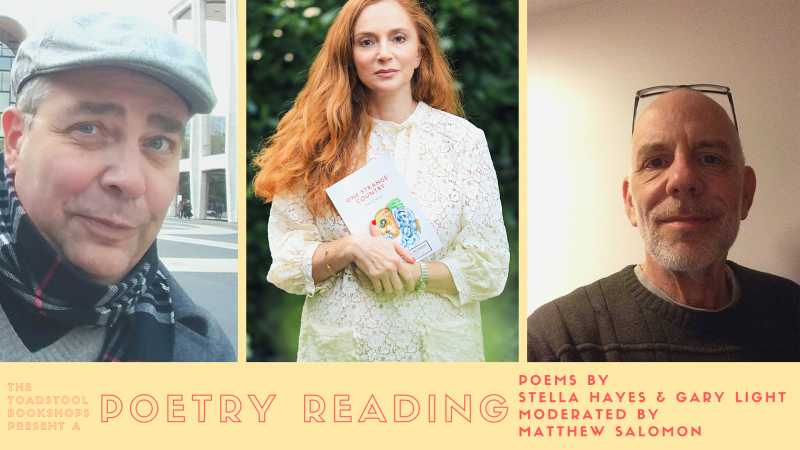 On Thursday January 14th at 7pm, the Toadstool Bookshop will host a virtual poetry reading with poets Stella Hayes and Gary Light to celebrate Stella’s debut collection of poetry, One Strange Country. This reading, live and free on Zoom, will celebrate both writers’ work and will be moderated by writer and translator Matthew Salomon.

Stella Hayes grew up in an agricultural town outside of Kiev, Ukraine and Los Angeles. Hayes earned a creative writing degree at University of Southern California. Her work has been nominated for the Best of the Net and has appeared in Prelude, The Recluse, The Lake and Spillway, among others. She lives with her family in Larchmont, N.Y. One Strange Country is her debut collection.

Gary Light was born in Kiev, Ukraine in 1967. He has lived in Chicago since 1980. He holds a degree from Northwestern University with a B.A. in Slavic Literatures Studies, with department honors, double majoring in Political Science. He is an attorney and works in international law, both in the U.S, and abroad. Since 1993, Light's poetry has been published widely in literary journals and poetry anthologies in the U.S., Canada, Israel, Europe and Ukraine. He is a member of the American PEN Center and the Writer's Union of Ukraine. Since 1992, Light’s books of poetry have been published in Russian. The most recent collection, The Return Trajectories was published both in the U.S. and Ukraine in 2017. It was awarded the Ukrainian Writers Union's Literary Prize for the best collection of original poetry published that year. In the beginning of 2020, Lightsis first English-language poetry collection Confluences was published in Chicago (Bagriy, 2020). The hardcover edition of the book was subsequently published in Europe by Kayala in 2020. Light regularly participates in poetry readings and other literary events on both sides of the Atlantic.

Matthew Salomon was born in late 1956 and was raised by émigré parents from central Europe (Germany and Poland) who met in the NYC area nearly a decade earlier. He earned graduate degrees in mathematics and economics at Boston University and the Johns Hopkins University (1978 and 1982, respectively) and later earned an MFA degree in literature from American University in DC (2007). Having completed a 32-year career as an economic policy advisor for the U.S. Congress in 2015, Salomon now works as a statistical model developer for a progressive DC non-profit organization and also as an adjunct associate professor at the University of Maryland Global Campus teaching economics to adult learners. He’s been reading, writing and translating poems since his childhood and, as an adult, Matt’s worked on cross-disciplinary poetic projects with painters, photographers, musicians and digital artists. His translations are mostly from modern Hebrew (Israeli) poetry but has also translated from German, Yiddish and Spanish (the latter, with help from his daughters who are fluent). Salomon has regularly read his poems in a variety of current and former DC-area venues over the years (e.g., Takoma Park’s Third Thursday Series, DC’s Joaquin Miller Summer Poetry Series, Chapters Literary Bookstore and annual Artomatic ekphrastic poetry exhibitions). During the quarantine, he’s enjoyed reading new work and old with other poets from around the world. His poems and translations have appeared in a 2007 collection (Returning to the City of Hyphens), poetry journals (such as Folio), collaborative volumes, as well as his poetry blog golempoem.

To attend this event, click on the Zoom link below on January 14th at 7pm!