Throne of Darius is a story of high adventure, romance and war - especially war, told with heart and a sense of humor. Mark McLaughlin paints a unique and irreverent portrait of Alexander the Great, who certainly was not "great" to everyone. Unlike the majority of historical and literary works, this novel does not glorify the Macedonian king but instead tells the tale of the young conqueror from the point of view of those who fought against him.

Mark lives in Peterborough and has been a writer, journalist, author and game-designer for nearly 50 years.  His works include two history books, The Wild Geese and Battles of the American Civil War, and the science fiction novel Princess Ryan's Star Marines (as well as a board game of the same name).  He has published 24 board games, the most recent being Ancient Civilizations of the Inner Sea, which will be followed by Ancient Civilizations of the Middle East. 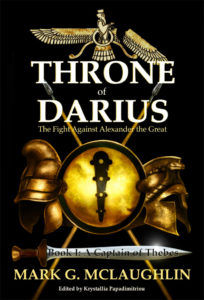 Someday, you make a game for me, Daddy?" is what little Ryan McLaughlin asked her father, Mark, many years ago. He designed not one but two games for his daughter, and then wrote a novel based on the later of those: Princess Ryan's Star Marines. Now he has written another novel - a work of historical fiction: Throne of Darius. It is the first in a series about characters (real and imagined) who fought against Alexander the Great.

A free-lance journalist, Mark is the author of two novels and two books on military history and is the designer of 24 published games - most recent of which is Ancient Civilizations of the Inner Sea by GMT games. Mark also writes for many clients and publications. Although his principal work as a journalist over the last 40 years has been in foreign affairs, he also writes on everything from travel and entertainment to serious position papers.