Peterborough - "Another Day's Begun" - Our Town takes over our town 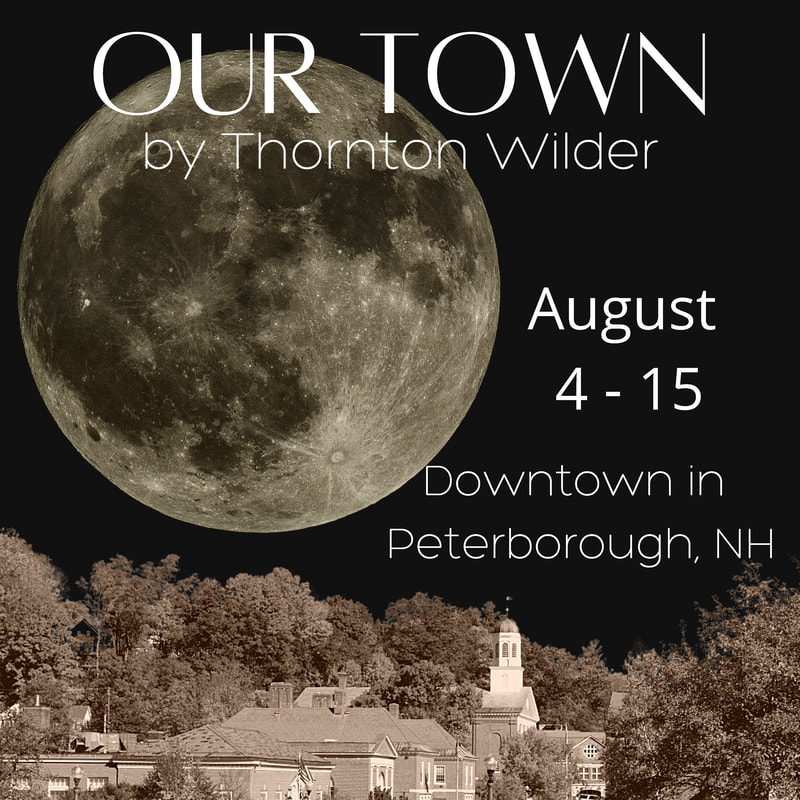 "Our Town" takes over downtown Peterborough August 4th through the 15th as the Peterborough Players presents their very first outside production.

Please join us on Saturday August 7th at 11 am when Howard Sherman, author of Another Day's Begun: Thornton Wilder's Our Town in the 21st Century , will be discussing the impact of the play at The Monadnock Center at 19 Grove St. This event is free and will be held outside in the Peterson Courtyard between the Monadnock Center and the town house. Guests should bring chairs or a blanket for the talk.

It is said that Thornton Wilder’s Our Town is one of the most produced plays in America and it has been that way since the play debuted in 1938. Why is Wilder’s play such a perennial, when so many plays from that era are rarely revived – or forgotten? Howard Sherman's new book  doesn’t offer a singular answer to that question, but rather the thoughts and recollections of actors, directors, musical directors and designers who have engaged with the play in both the US and UK, offering their insights into the play and what its has meant to their own lives. The participants range from students and amateurs to well-known figures like Jane Curtin, Helen Hunt, Jane Kaczmarek, Moisés Kaufman, and Michael McKean.

The book also offers a short history of the early years of Our Town, as well as a survey of how the play has permeated pop culture, with a recap of its many radio and television versions, as well as references and even scenes turning up on Cheers, Growing Pains, Riverdale, My So-Called Life, The Nanny, and 30 Rock.

Every production of Our Town has a story to tell beyond Wilder’s own. One year after the tragedy of 9/11, Paul Newman, in his final stage appearance, played the Stage Manager in Our Town on Broadway. Director David Cromer’s 2008 Chicago interpretation would play in five more cities, ultimately becoming New York’s longest-running Our Town ever. In 2013, incarcerated men at Sing Sing Correctional Facility brought Grover’s Corners inside a maximum security prison. After the 2017 arena bombing in Manchester UK, the Royal Exchange Theatre chose Our Town as its offering to the stricken community.

80 years after it was written, more than 110 years after its actions take place, Our Town continues to assert itself as an essential play about how we must embrace and appreciate the value of life itself. Another Day’s Begun explains how this American classic has the power to inspire, heal and endure in the modern day, onstage and beyond.

Howard Sherman is a theatre administrator, writer, and advocate. He has been executive director of the American Theatre Wing and the O'Neill Theater Center, managing director of Geva Theatre, general manager of Goodspeed Musicals and public relations director of Hartford Stage. He has also interim director of the Alliance for Inclusion in the Arts. Since 2012, he has been the US columnist for The Stage newspaper in London, and in 2018 was named Contributing Editor of Stage Directions magazine. His writing has appeared in a number of publications including Slate, The New York Times, the Guardian, and American Theatre Magazine. He was cited as one of the Top 40 Free Speech Defenders in 2014 by the National Coalition Against Censorship and received the Dramatists Legal Defense Fund's "Defender" Award in 2015; he frequently consults, writes and speaks on issues of censorship in both academic and professional theatre.

Another Day's Begun: Thornton Wilder's Our Town in the 21st Century (Paperback)

Our Town: A Play in Three Acts (Paperback)