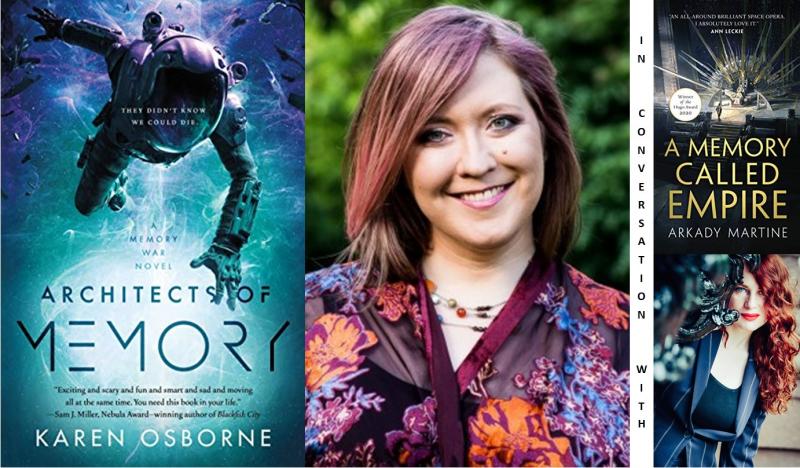 Don’t miss Karen Osborne in conversation with Arkady Martine to present and discuss Karen Osborne’s unforgettable science fiction debut, Architects of Memory. In a hyper-capitalist apocalyptic future, an alien weapon holds the key to redemption--or annihilation. Terminally ill salvage pilot Ash Jackson lost everything in the war with the alien Vai, but she'll be damned if she loses her future. Her plan: to buy, beg, or lie her way out of corporate indenture and find a cure. When her crew salvages a genocidal weapon from a ravaged starship above a dead colony, Ash uncovers a conspiracy of corporate intrigue and betrayal that threatens to turn her into a living weapon. Fans of space opera will enjoy this new story and will look forward to more from Osborne, who has a bright future ahead of her in long-form fiction. Osborne will discuss the book in a conversation with Hugo-award winning author Arkady Martine, as well as take questions from participants, via this online Zoom event.

Karen Osborne is a speculative fiction writer and visual storyteller living in Baltimore. She is a graduate of Viable Paradise and the Clarion Writers' Workshop, and won awards for her news & opinion writing in New York, Florida, and Maryland. Her short fiction appears in Uncanny, Fireside, Escape Pod, Beneath Ceaseless Skies, and more. Architects of Memory is her science fiction debut.

Arkady Martine is the Hugo Award-winning author of A Memory Called Empire. She is a speculative fiction writer and, as Dr. AnnaLinden Weller, a historian of the Byzantine Empire and a city planner. Under both names, she writes about border politics, rhetoric, propaganda, and the edges of the world. She lives in Santa Fe with her wife, the author Vivian Shaw.

Karen’s book Architects of Memory is available for purchase at any of the Toadstool Bookshops or online below.

Join the Zoom Meeting by clicking the button: